We love to see citizens incorporated into this art project using marine debris and it is exciting to see how one of the SEA-MDI projects is expanding! Here is the update, courtesy of Amber Von Harten of SC Sea Grant.

Through a partnership with Beaufort County Public Works, the SEA-MDI sponsored Clean Marine Beaufort project , organized by the S.C. Sea Grant Consortium, removed their first recreational boat from the marshes of Beaufort County, SC. Funds from the SEA-MDI project will support the disposal of the boat. 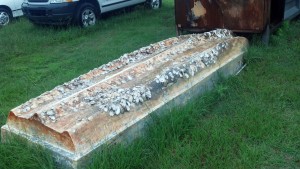 The Clean Marine Beaufort project partners are also heading up another project linking marine debris outreach and celebrating our worlds oceans through World Oceans Day Beaufort, SC, a month long celebration in June. Part of this project is to use art as a conduit to get a message put to the community about the impacts of marine debris on the oceans. The art project, in partnership with the Beaufort County Arts Council and ARTworks, will support bringing in a local artist to create a large marine debris sculpture called “Locomocean.” The sculpture will use a waste container, courtesy of Waste Management, as the base for the sculpture and the community will bring the artist pieces of marine debris or recyclables to build into the art piece. Additionally, the recreational boat removed with support from Clean Marine Beaufort will be used in the sculpture as well before disposal. The artist is holding two community art workshops to work with the community on building the sculpture on June 2 and 9 and the sculpture will be finished and revealed at the World Oceans Day Beaufort Festival on June 16 in Beaufort. 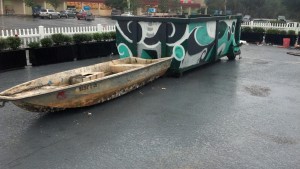 An article was written in the Island Packet about the project.